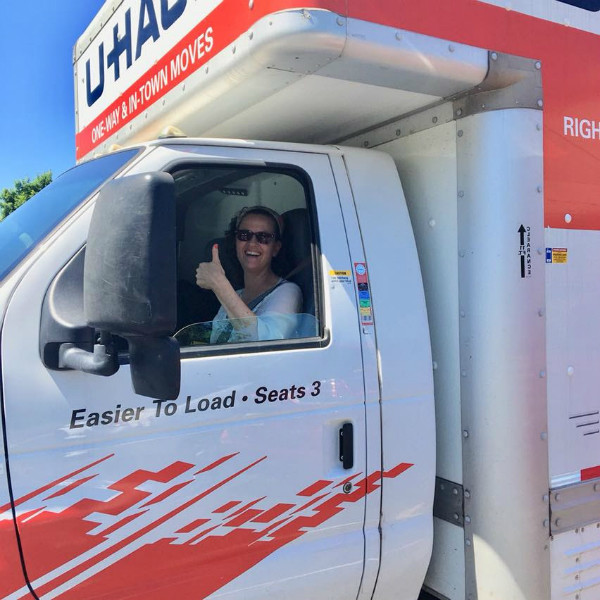 What kind of B.S. are you hauling around?

B.S. stands for “belief systems” and they weigh us down… and we don’t even realize it. Often we adopt other people’s beliefs when we’re younger and they simply become a part of our personal “operating system.”

The thing is at some point they stop serving us… and if we don’t shift them, they stop us.

As you know by now, I recently moved to Saxapahaw, NC. Though living in Southport, NC, over the Fall/Winter/Spring, the few belongings I kept/owned were stored in a friends basement back in Central Jersey. As much as I searched for an economical mover/shipper option, they were all more than I wanted to spend.

That left…. me and good ‘ole UHaul! (see the picture above!)

This was the first time I ever drove a truck – and boy, was I nervous!! I mean, I drive a MINI Cooper, for gosh sakes! My MINI is 3x smaller than the truck! As a Virgo who likes things organized and planned, I still had high anxiety about driving that truck from NJ to NC.

I decided to fly to NJ (thank you Frontier Airlines!) and drive the truck back so I didn’t have to tow my car. I had movers pack the truck in NJ so my things would be safe for the 8+ hour drive down – which I decided to split over two days.

When I first got on the road, all of my senses were on high alert. There was no cruise control, so I had to be every aware of my speed and the speed limit. The truck handled VERY differently than my car! I needed to be mindful every time I changed lanes, turned, or accelerated.

It took a good couple of hours of driving to finally stop checking the rear view mirror! I had to use the gigantic side view mirrors instead. Once I finally released that habit, I felt FREE! I no longer cared about the cars behind me. I was liberated to only look forward.

“There’s a reason your windshield is bigger than the rear view mirror.”

Why do we spend so much time looking behind us? Worrying about what people thought of something we said, did, or wore? Concerned about imposing on others or holding people up if we’re going slower than they are?

Sure, I got honked at a few times by impatient drivers…. but I didn’t care in the least. I knew I was doing my best as a first time truck driver. I was confident that I wasn’t being a hazard to anyone else by choosing to adhere to the speed limit and err on the side of caution going down hills and pausing at intersections.

Where might you be hung up on the past?

On something you did or said?

On something someone else did or said?

Where can you release the B.S. that it matters what other people think of you because of it?

Where can you embody the belief that you’re already doing and being enough?

Your belief system is your inner operating system for how you navigate your whole life. Ensure that you’re conscious about what’s “driving” you and the “load” you’re carrying.

You are always in choice and you get to choose your own operating system… one that fully serves you.

“What lies behind us and what lies before us are small matters compared to what lies within us.

And when we bring what is within us out into the world, miracles happen.”

P.S. – If you’re ready to release the load of other people’s B.S. in your personal operating system, click here to book a free Discovery Call with me. It’s time to Thrive!

Christine Clifton is the author of “You don’t have to shout to Stand Out” and teaches soul-powered entrepreneurs how to keep their inner fire burning so they don’t burn out. By building a fun, co-creative relationship with their business, they better align their practical DOING with their natural BEING and gain focus and energy. They have fun with their work again, feel better than they have in a long time, and see more of the right leads and opportunities come their way….. and they Thrive!